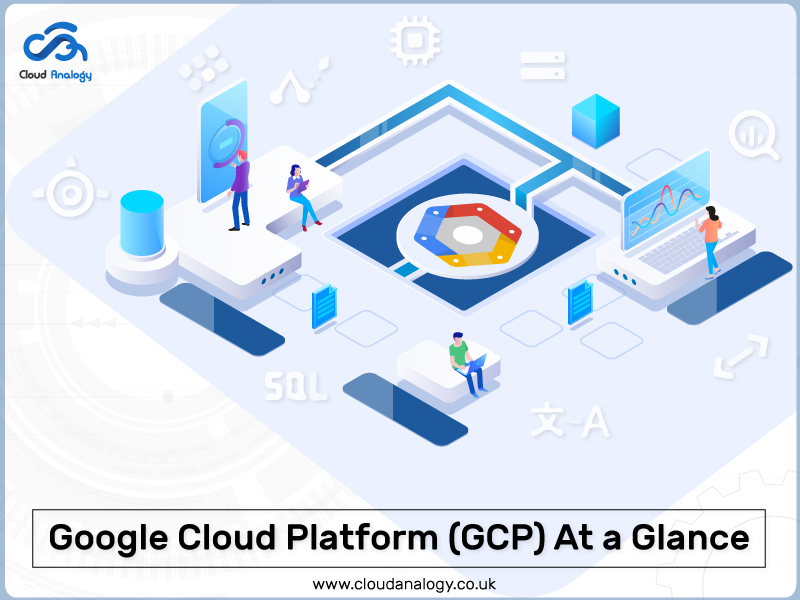 The Google Cloud Platform is a Google product that runs on a similar infrastructure and Google uses it for end-user products. It includes computing, app development, and storage services that execute on Google hardware. Users can access these services through dedicated network connectivity via the public Internet.

Google Compute Engine (GCE) is the Infrastructure as a Service (IaaS) segment of Google Cloud Platform that is developed on the global infrastructure, which runs Google’s search engine, Gmail, YouTube, and other services. It facilitates users to use powerful virtual machines in the cloud as server resources instead of acquiring and managing server hardware.

What is Google Cloud Platform for?

The Google Cloud Platform provides computing resources and services for installing and operating applications on the Internet. It provides a space for professionals and businesses to develop and run the software and utilize the internet to correlate to the user of that software.

When a user runs a website, application, or service on Google Cloud Platform (GCP), Google oversees all the resources used, including the amount of processing, memory, database queries, and network connectivity.

Cloud functionality abstracts away the entire core infrastructure, allowing the user to focus on the code and build applications faster than before.

Cloud features automatically manage and scale the underlying infrastructure, according to workload.

Run the code in response to an event

With cloud capabilities, the user can retrieve the code through the Cloud Platform, Firebase, and Google Assistant, or retrieve it via HTTP directly from the web, mobile devices, or backup applications.

Cloud Functions support code written in JavaScript (Node.js), Python, and Go. Users do not need to learn any new language, learning tool or framework. They just have to enter the code, including native libraries that are saved on the platform.

Google App Engine is defined as a service that provides front-end hosting and scalable Internet services. It requires applications to be built in Java or Python that will be saved in Google BigTable and is used in Google’s request language.

Google app engine is far better than others as it delivers more infrastructure functionalities and eliminates system administration as well as development barriers that allow creating scalable and reliable applications easily and rapidly.

There are so many cloud storage solutions made available by different companies, but Google Cloud Storage is one of the safest and most consistent storage solutions for users. In Google Cloud Storage, users can save data that can be unstructured and unformatted. Additionally, Google has the ability to store non-relational NoSQL storage, BigTable cloud databases, and fully relational MySQL storage.

It is utilized to execute and handle Docker containers. It is basically a cluster management system. It is based on the Kubernetes container orchestration engine of Google. Google container engine can be utilized for hybrid cloud, public cloud, and on-premise infrastructure.

It is a data warehousing system using Google Cloud Storage created for huge amounts of highly distributed data that enables you to run SQL queries on multiple databases at various levels of structure.

Instead of using traditional SQL relational, set-oriented index databases, BigQuery uses a column storage system in which components of records are organized in parallel storage systems.

Cloud AutoML is a set of services that allows applications to take benefit of machine learning models that can be deduced in large amounts of data and use those patterns within a program.

Cloud Run is a newly announced service that allows software developers to use and deploy applications to Google Cloud using a serverless model. It creates and runs applications that are hosted locally rather than in the cloud.

In a nutshell, Google Cloud Platform provides more top-notch services that are related to Big Data, Artificial Intelligence, and Machine Learning. These Big Data high-level services are utilized for data analytics and processing.Google Cloud Services can be utilized for various purposes such as weather change training, an algorithm to work effectively and efficiently and build applications easily and quickly. It opens a lot of new possibilities and there is no denying the fact that many enterprises are choosing it more frequently.

“Nitish Bhardwaj, a highly accomplished Salesforce Principal Consultant, is the Chief Information Officer with extensive experience in enterprise IT strategy & development, project contracting and negotiations, Business Relationship Management, and Budgeting and compliances. Nitish, a renowned Salesforce Certified Administrator and a CPQ specialist, is a person of great integrity, always keeps his commitments, and positive till the core. One of his amazing qualities is the calm and poise he exhibits even when facing difficult and stressful situations. He has the knack of reaching to the core of subject and possess the capabilities to make to the top. Nitish has done an excellent job of being completely in charge of some of the most technically challenging assignments and is a perfect blend of management and technical capabilities. Full of energy, Nitish is a very detailed oriented person with excellent follow-through, he is always open to assist other teams in understanding various projects requirements so that collaboration can happen in the best possible ways in an environment conducive for the business. A go-getter in his own true ways, Nitish is always ready to take up challenges and always demonstrates a rare quality of flexibility to allow for situational variances and also acts as a solution provider, as and when any issue or clarification request is brought to his notice. A great leader to his team, Nitish is both kind and compassionate while having a firm eye on the end target..”